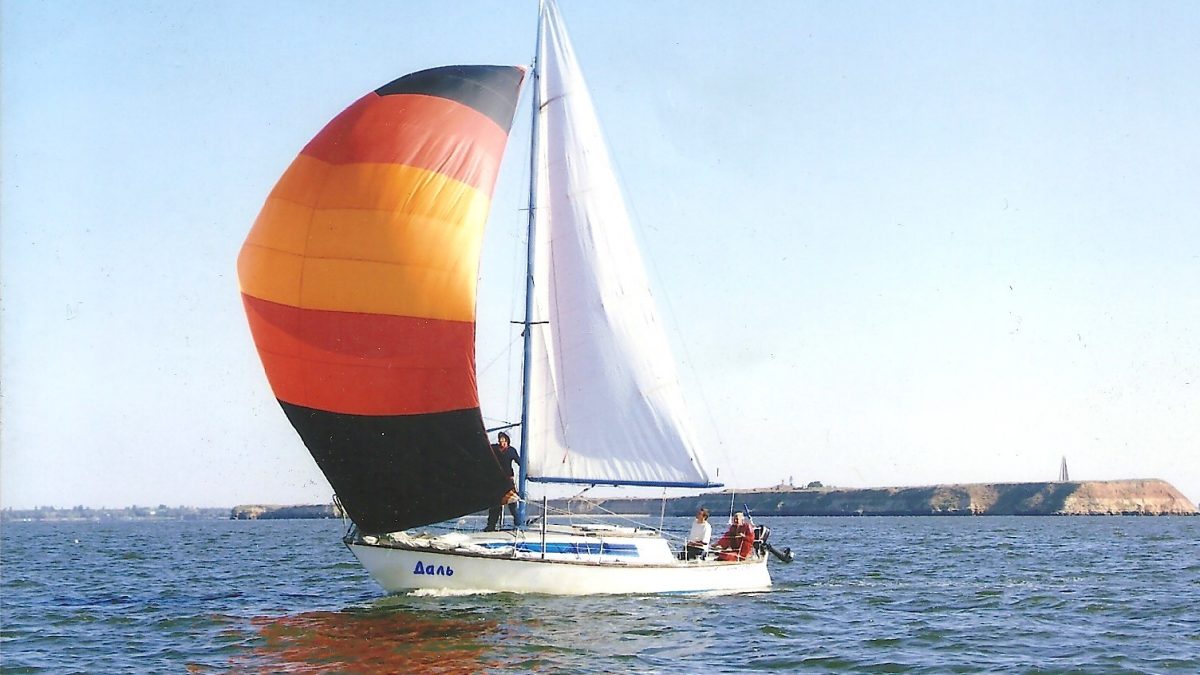 "In the distance for a cup of coffee .."

Brief (very short) content of the first three parts: We got on without money on a yacht to Istanbul.

Morning ... everyone has one cigarette and one thought - what to eat, what to drink, smoke and even what to light a cigarette with during the passage, however, it is already traditional for this trip.

Second: Sell an aluminum case, but in the 90s - you can stay behind the case and without bells.

Third: Sell, or rather "suck in" a spare old, rusty, small and poor anchor. And we stopped there.

We went around all the manned boats and got an equal number of refusals, differing only in tone and wording. But already an old acquaintance, Jurgen, who immediately agreed to buy an anchor and, suspiciously *, did not even bargain, but reimbursed its cost with products with interest.

* And, probably, I would have thrown a couple more cans of stew if the guys agreed not to drag this rusty piece of iron on board, but would take it with them.

The happy Moremans slowly plunged, washed themselves with fresh water for the last time in the next few days and set off back.

At this point, I don't want to "chew snot" and paint the delights of a yacht crossing on the Black Sea. I'd better go and smoke a pipe, and you yourself can imagine at least for a minute:

Products ran out on the way to the Crimea.

- Let's go to Crimea for a couple of days, we will take tourists, we will cut down the dough and go home.

- So they gave you to chop the cabbage there! Everything was captured there, long ago - found, damn it, pasture!

- Not ssy, salaga - we will agree somehow! Your boys!

On that and decided. Further - OUR border guards *. I don’t want to describe how they passed, what they said and who they called, and I won’t find so many swear words ... so we will skip this part.

After mooring in the Yacht-Club "N" in the Crimea, there was no need to wait long for the parliamentarians - the "colleagues" of the Moremans came themselves.

Our team explained the situation and asked who we could talk to about the issue of "cooperation". Seva came up, looking more like a taxi driver than a yachtsman, and with him a couple of "colleagues" and the Captain decided to take the initiative into his own hands:

- Guys, the situation is like this, there is no money at all, to stomp home for a couple of days. We'll earn some money here as a cab driver - another day, we'll shop and dump, well, we'll share, of course, ours, after all, in a brotherly way, eh? - Seryoga began friendly.

Andryukha stood next to him, and Sanya stood a little to the side, smoking a cigarette and looking askance at the audience.

- Do you know how many people there are willing to earn some money ?! What are you guys, from an oak tree? - “Somewhat rude,” as it seemed to Andryukha, Seva the taxi driver reacted.

- Yes, they said, we'll share it normally, say 30 - unfasten thirty, say half - unfasten half, we're not for a profit, lads! - the captain was taken aback.

- Nooo, b ... - you were told! Why are they so dull? Or, ..yat, to jog the boat for clarity ?! Scratch, guys, or stand still, you get me! The bazaar is over! - The taxi driver spat, turned around and even managed to take a couple of steps.

Andryukha looked at Seryoga, and Seryoga looked unkindly at this whole "taxi company" and feverishly remembered whether the sawn-off shotgun was lying on the yacht.

But then from the side a loud tramp whistle and Sanya's voice were heard:

- Hey, yooooooy go! (Taskist already shuddered and turned around) - Sasha made a thrust and threw a sidelong glance at Seva who did not care.

It seemed that at that moment even the fish in the port gurgled: "Oh-pa" and froze .. Andryukha and Seryoga were frankly taken aback.

- What do you want me to do ?? Ober-taxi driver grimaced, took a couple of steps towards Sana and stared with a bullish stare.

- Che in the eye, but you will not be glad. I see you are the sixth suit, since you are jerking off your fate with a botanist ... Kislyak wouldn’t have a mandate here ... but I wouldn’t cut a screw until the Ramses were scattered with people, but the problem had not resolved ...

Seva interceded, with the same, but already overexposed and from this completely idiotic expression on his face.

- These guys, the right ones - and they caught the silence, and they warm up the communal fund ... And there was a rumor about you, sho diesel like in your birthday, but they sat down tightly on the trunk ... It's not my suit with you, Seva, we lived and were bazaar, yes rub over the boiler. And you have to live according to colors, not regions. Sharing?

- Honest people with a practical bazaar drove up to you, and the fact that without a match, they said so - they have a naked wasser, and you have not sniffed with them yet, but already started to bass on strangers. But the lads don't know you ... but will they know, will they know, or do you want to shuffle for a "torn" tail? aaa?

So sho my tankers will swing along the coast tomorrow, and you hang out on their feet Vankov, a couple - for dinner. God told to share. Did you smoke, Seva?

- Now that's it, Seva ... maidan peas! Come on guys! - Sasha once again looked around the entire "taxi company" - for dinner ... - He reminded him at last and went to the boat.

Andryukha and Seryoga slowly came to their senses and also imposingly "weighed the anchor."

They walked to the boat without speaking, and there Andryukha could not resist:

- Do not bzdi, Andryukh, - Sanya smirked slyly and winked - I went to the "drama club" in my youth. - Let's go and shoot a cigarette with you, otherwise there is nothing to smoke.

The next day, exactly at 12.00, six people stood by the boat, wanting to ride. Sasha accepted the calculation. We “packed up” for a day so that passengers would not be bored and Andryukha and Seryoga went to “pokatushki”, and Sanya spent the whole day in a tavern on the embankment, drinking cold beer and looking at “Dusya” - a blown and stretched orange spinnaker, which for the sake of “ Moremansky Pontus "flaunted on the yacht.

In the evening, Seva came and invited him to a restaurant, hinting in a foolish way that "people want to meet."

- Stop it! - Alexander reassured everyone and the friends went to the tavern with mixed feelings.

They were awaited by a company of 15 people and a densely packed table, at which the captain and Andryukha were seated, but Alexander was invited to go to the veranda, where another table was set for only two.

Behind him sat my grandfather in a white shirt, in the same white trousers and in canvas slippers on his bare feet.

Grandfather invited Shura to the table, nodded to the mourner and they were left alone. Then he looked for a long time, nodded and finally introduced himself:

- Shu (gh) gra, Shu (gh) ra - stop, I know who you are! - the old Odessa citizen tiredly prokartavil. - Have pity on your tonsils! I am already in ku (gx) rse, sho Vy guta (gx) rite, as se (gx) rpom for beitsal My shlemazly threw vche (gh) ra b (gh) ditch on the forehead so hard, they are already waiting for a knock at two (rh) rb and are ready to throw their head into the manure ...

Grandpa looked reproachfully at Sasha, took off his glasses, breathed, rubbed it, and continued:

Alexander began to wither more and more, like a kid caught by the ear and was already fiddling with the corner of the tablecloth. Grandpa waited for a pause:

- Only out of respect for your (GH) Parent, Shu (gx) ra, I p (gx) rushed you into this bodega ... and moreover, I will give you pa (gx) ru of bales of koshe (gx) rnogo "lazy" You say (rh) rite to get to the house and so that you are here, Shu (rh) ra, not (rh) work on the toilet with your kents. And then after your today's mans with spinakE (gh) ramie, tomorrow every poz will want to be done to (rh) rasivo, but I need it? ... Pe (rh) redawate daddy shalom, Shu (rh) ra , and take the next (rx) time your eyes in (rx) hands, otherwise one of them will be stretched for you, so p (rx) grow, Shu (rx) rochka, on your saddle.

Sasha, beaten by a dog, left the veranda and returned to his own, sat down and sighed deeply, Andryukha immediately asked:

Sanya, looked at the closed door of the veranda, then sprawled imposingly on the chair and said:

- Okay! - We decided! The old "picking up grubs" organizes so that they go home like in chocolate! - His boy turned out to be!

Indeed, when we returned deep after midnight from the banquet, there were three boxes with various provisions and delicacies on the boat, and in the fourth smaller container rang. The guys didn’t tempt fate anymore and set off at dawn so that in a few days they would be greeted by their native Yacht Club!

This was the end of one small, but very bright episode from the whole yachting life, but how many there were ... and how many more to come ...

To my close friend and